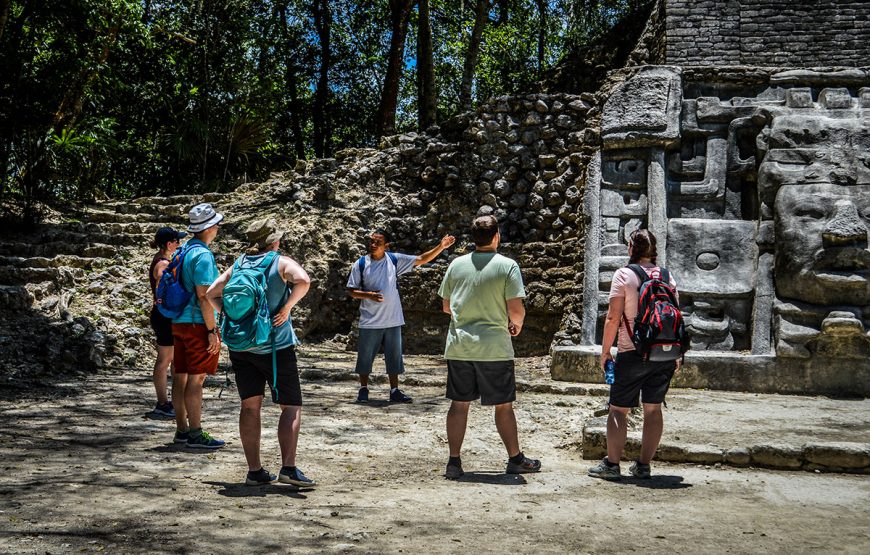 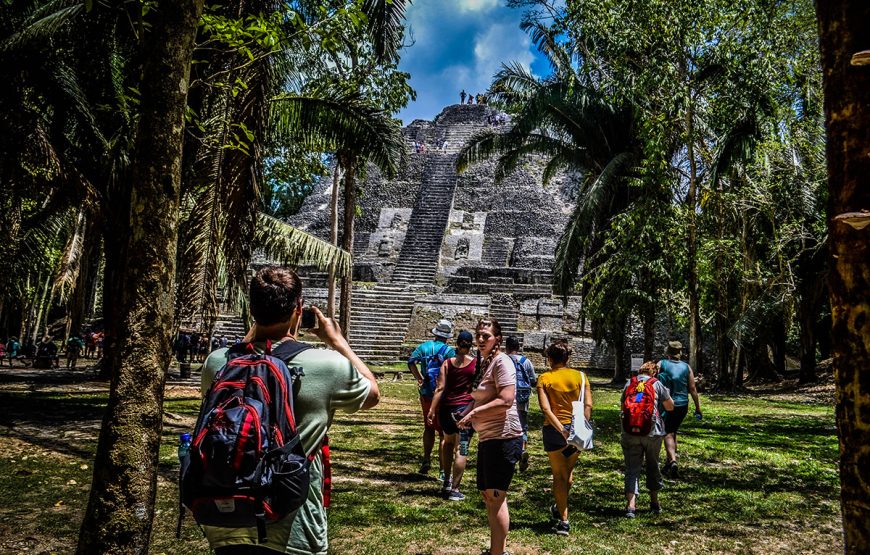 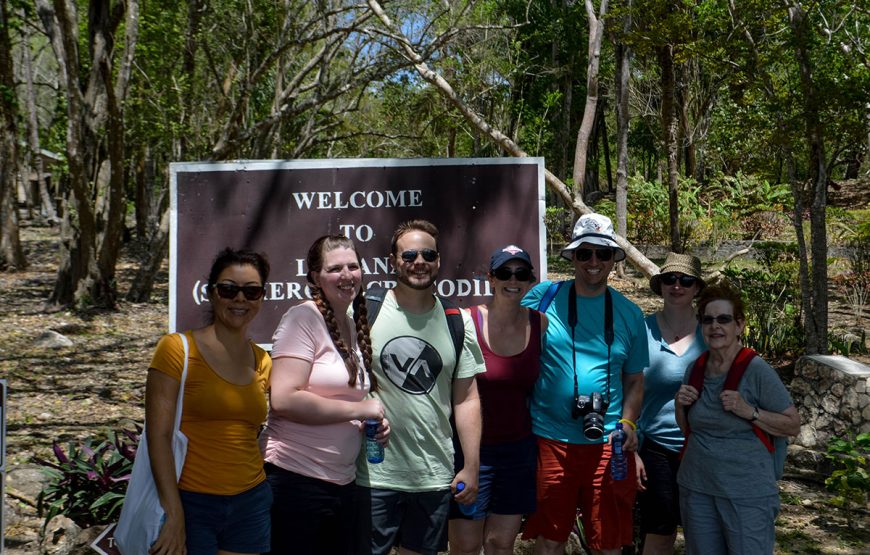 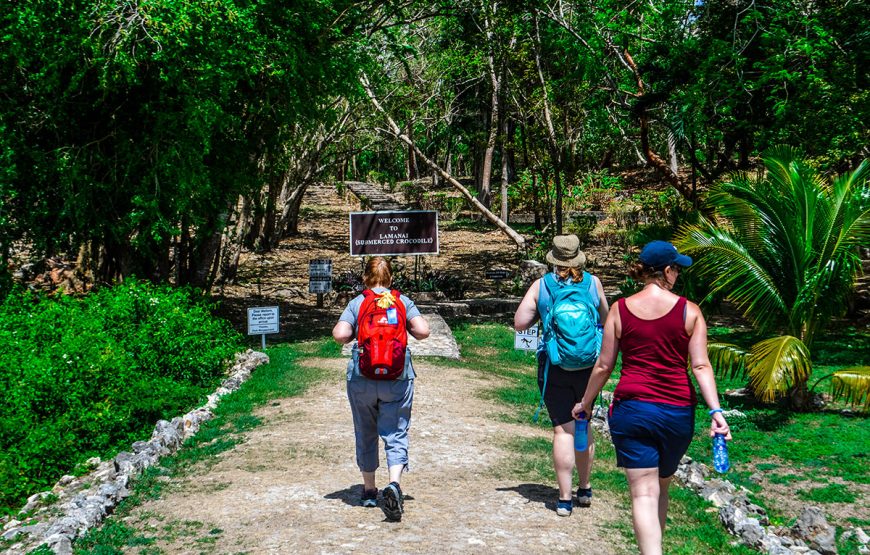 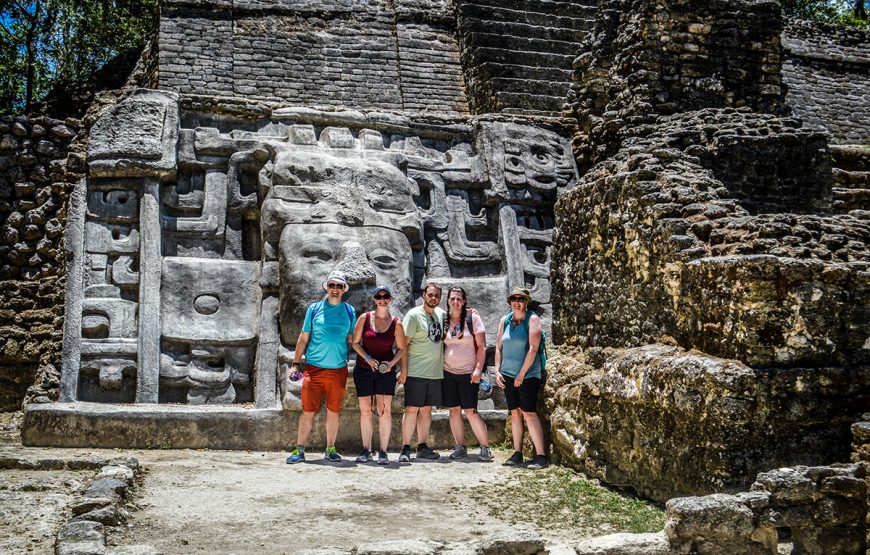 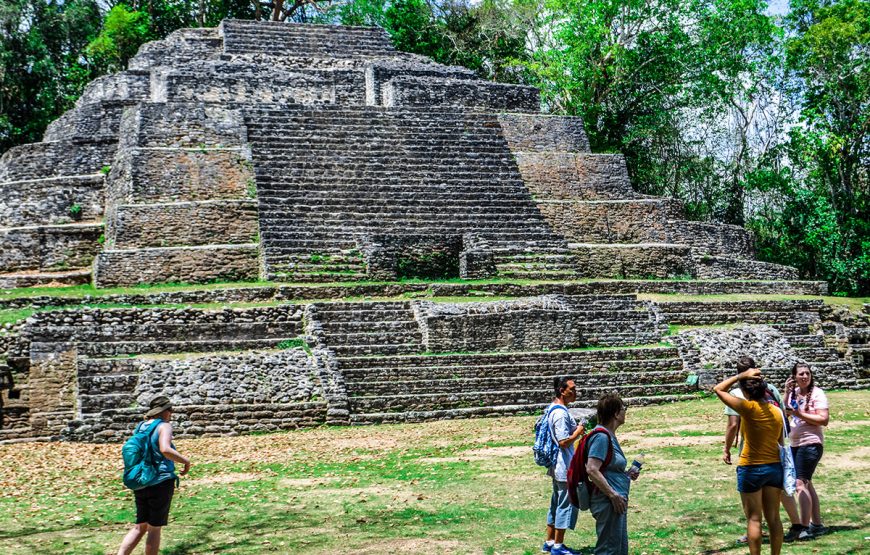 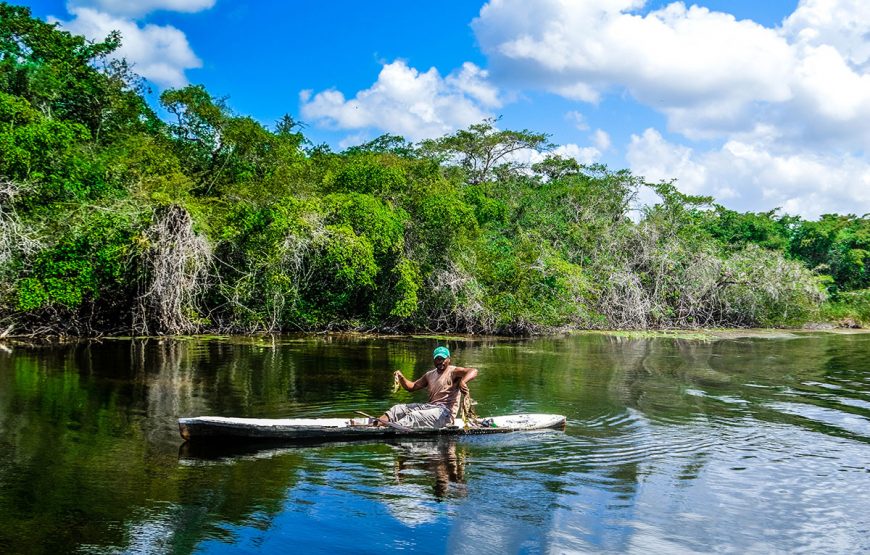 Lamanai is the Maya word for “submerged crocodile.” The site’s name – “Lamanay” or “Lamayna” was recorded by Franciscan missionaries in the seventeenth century. It is one of the only sites retaining its original name and is among one of Belize’s largest ceremonial centre. The name Lamanai helps to explain the numerous crocodile motifs at the site. Crocodile effigies appear on figurines, vessel decorations, and on the large headdress on a limestone mask at one of the principal structures at the site.

Lamanai, located on the banks of the New River Lagoon, is easist visited by boar river tour along the spectacular new river. The trip is a nature-lover’s heaven for numerous species of water birds live along this rich and diverse waterway. You may even be lucky enough to view iguanas and crocodiles as they sun themselves on the river banks. There are also interesting flora and fauna to be seen at the Lamanai reserve.

While the site was recorded by missionaries and also mentioned by Thomas Gann in the 1920’s, it was not until 1974 that formal excavations were carried out at the site by Dr. David Pendergast up until 1986. More recent work has been carried out by Dr. Elizabeth Graham.

Previous archaeological work has focused not only on the ancient Maya aspect of the site, but also the colonial era, with investigations into both the Spanish churches as well as the sugar mill.

Lamanai boasts the third tallest Maya structure in Belize, aptly called High Temple, which stands 33 meters tall. Perhaps the most iconic feature of Lamanai is the Mask Temple. The masks featured on this temple is 4.2 m high. It was built up of limestone blocks which were mortared together and then overlaid with a thin layer of lime plaster and a finishing coat of stucco.

This method of construction is unusual in the Maya area, where masks and friezes were usually built up and modelled with plaster on a stone block framework. Some blocks appear to be quite large; for example, the upper section of the face is one large block whereas on the sides of the face, the edges of smaller blocks can be seen. The nose, however, was made up of two pieces of stone either side; the nostrils and middle section were then infilled with mortar and smaller pieces of stone. Each ear flare is also carved from one single block of stone.

Does NOT include water taxi or flights from San Pedro to Belize City!

Purchase your water taxi or local flight before the day of your trip. Check in at least 30 minuted before your scheduled departure to Belize City!

Guide meets you as you get off the boat in Belize City at the water taxi terminal.

Roughly and hours drive north of Belize city on the Philip Goldson Highway through small country villages we come to our docks on the banks of the New River, the hub of our activities for the day.

After using the bathroom facilities its off on a one hour river tour of the New River in route to the ancient city of crocodiles, Lamanai. In route see many species of birds, crocodiles, Iguanas and many other flora and fauna local to the area.

On arrival at Lamanai guests get a chance to use the bathroom facilitates again should they need and its off to tour. Learn the history of the only city in mesoamerica to be under continued occupation. Your guide will take you across 5 plazas and 5 temples explaining the history and demise of this once great civilization.

After your tour of Lamanai, guests are served a delicious local lunch after which its return to our docks via the new river for your return to Belize City. 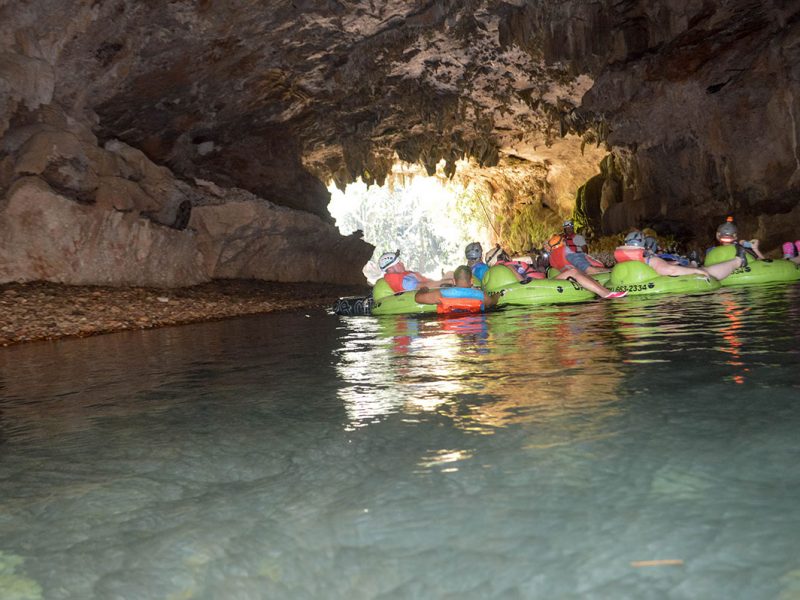 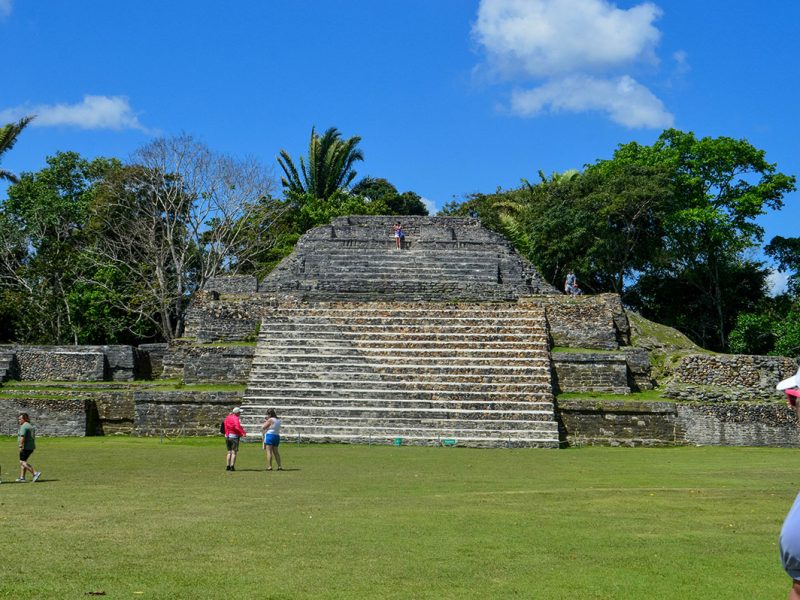 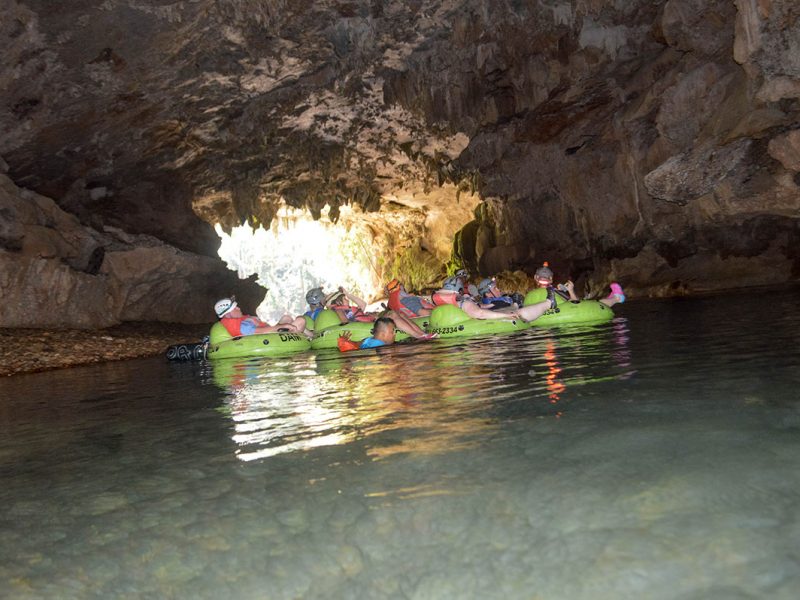 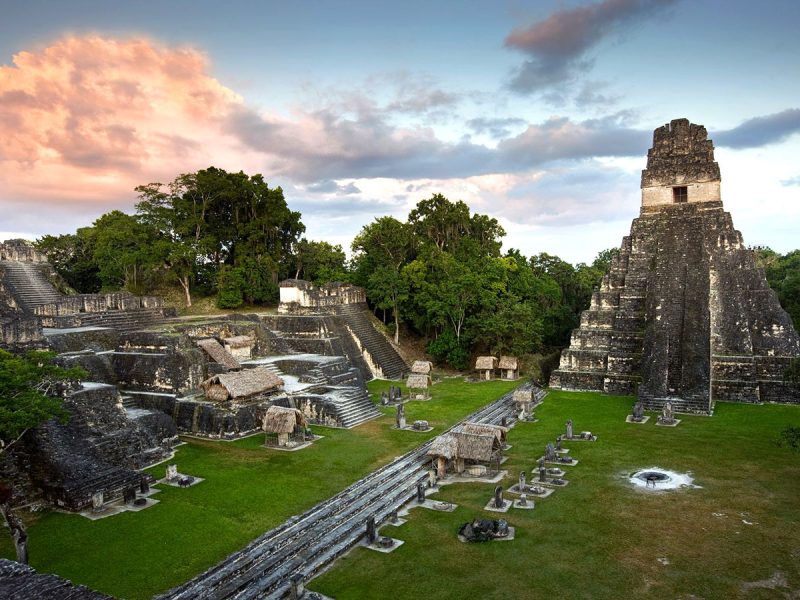